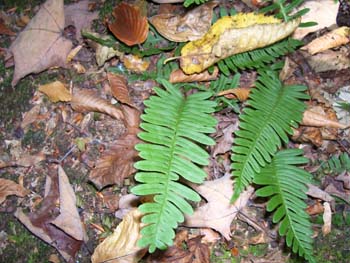 This hiking trail at Nelson-Kennedy Ledges State Park is a loop trail with two distinct sections. The State of Ohio labels the more difficult section of trail the "red" trail, while the more moderate portion of the trail is designated as the "blue" trail.

The trail is marked with paint on trees and rocks in accordance with the colors designated. Be attentive however, as the trail, like all trails at Nelson-Kennedy Ledges State Park, is poorly marked. Please stay on the "marked" trail, and away from dangerous cliff edges. Falling into a crevice or over the ledges would put a damper on the fun, so please, avoid the edges.

As you walk along this rocky trail, you will notice many small plants growing on the rocks in seemingly impossible places. From the yellow birch trees with their roots sticking tightly and slowly breaking ancient rocks, to the mosses, lichens, and vascular plants clinging to a frugal existence on the face of these cliffs and crevices. Try not to crush or damage these plants. it is important for naturalists and other lovers of nature to leave the resources intact for the next visitor to enjoy.

Many ferns such as the marginal shield fern, and the Common Polypody (Polypodium virginianum) frame your journey along this interesting path. Despite its name, this little fern is only found in certain habitats, and while not rare, is far from common in this region of Ohio.

As you hike along the trail, the geological features are the main attraction. You cannot escape the history around you. These sharon conglomerate cliffs and rock formations were created perhaps 300 million years ago when Ohio lay beneath a vast, shallow sea. The deposits at the bottom of the sea hardened into what became the cliffs before you.

Over time, water eroded the stone, frost and thawing cleaved it, tree roots ate away at the stone, and broke sections off to create the rock piles and formations we see today. Along this trail, several of the formations have colorful, descriptive names.

You will recognize "Fat Man's Peril" when you come to a spot in a particular crevice where it is obvious that a large fellow would have trouble squeezing through. After those of you petite enough to continue on walk through that tight gap in the rock, the trail widens again. Soon the trail narrows to just a canyon-an area aptly called "Indian Pass." Many native American artifacts found all over this park tell us that this name is not just some fanciful appellation, but a historical fact.

The trail gets even narrower as you approach Devil's Icebox. Just before a clearing in the rocks, you will reach a spot known as "The Squeeze." Devil's Icebox itself conjurs up images of the horned one keeping watch over this cold cave, waiting for the right visitor to trap in his dark, stark stone trap. It is literally an icebox, providing a welcome cool respite from the summer heat.

Soon this trail will lead you in a loop back toward your starting point ,where you can pick up the "white" trail for a quick and pleasant hike to Minnehaha Falls, where you can continue your explorations of Nelson-Kennedy Ledges State Park along a tributary stream of the Mahoning River.

Bring a picnic and take advantage of the grassy picnic area on the other side of State Route 282, near the parking lot. These trails are worth spending an entire day with the family.