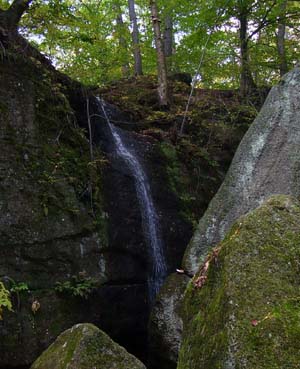 This beautiful waterfall is visible from a boardwalk on the Cascade Falls Trail at Nelson-Kennedy Ledges State Park.

While the walking trails at Nelson-Kennedy State Park are identified on the park signs with such monikers as "White", "Red", Yellow", and "blue" to match the color of the trail markers for each trail, in order to give you a more descriptive way to understand each trail, on NeoNaturalist.com the trails at this park are named for the interesting features along the trails. So, while the State of Ohio Calls this the "Yellow" trail, we are calling it the "Cascade Falls Trail" because, you guessed it, the trail leads to Cascade Falls, among other points of interest.

Being the yellow trail, the path is marked with blazes of bright yellow paint on rocks and trees. Be attentive however, as the trail, like all trails at Nelson-Kennedy Ledges State Park, is poorly marked. Please stay on the "marked" trail, and away from dangerous cliff edges. Keep your hike enjoyable and don't end it with an ambulance ride!

As you hike through the sharon conglomerate cliffs of Nelson Ledges, the forests along this trail are dominated by beech and maple trees. However, in the cool microclimate created by the massive stone formations and the cool water that seeps from them, a number of more northern species can be found. Most obvious will be yellow birch.

The bronze colored trunks of these trees sport curling bark that readily differentiates the trees from the typical rough-barked maples or the smooth gray bark of the American beech trees of the area. The botanical diversity along this trail, and the others here at Nelson Ledges, is quite interesting. If you are inclined to such pursuits, bring along your field guides and spend the day botanizing along these trails. You will not be disappointed.

Cascade Falls is a sight worth beholding. This 50 foot tall stream of clear, cold water is not a high volume thriller, but it is a fine, artistic rendering of a waterfall that you might expect to run across in Rivendell as you visit the elves in your dreams. Flowing over the sharon conglomerate cliff and down into a shallow pool beneath, Cascade Falls marks the entrance to Gold Hunter's Cave. Legend has it that the cave is thus named because back in about 1870, people could sometimes see gold glimmering in the water beneath the falls. Turns out that the minerals in the area, and particularly here along Crystal Creek, are rich in iron, including Iron Pyrite, also known as fool's Gold.

After visiting the falls, take the trail back along the base of the ledges. Soon you will enter a natural tunnel and enter an area known as "Old Maid's Kitchen." You could imagine how this cave got its name. After passing through, you will soon come to the aptly named "Dwarf's Pass". Don't worry, unless you are a six-foot man with a child carrier strapped to your back, you should be able to pass through with just a little crouching. If you are a six -foot man with a one year old strapped to your back, you can still get through, but it may entail acrobatics on both your part and that of the kid!

Soon this trail will lead you to the Minnehaha Falls Trail, where you can continue your explorations of Nelson-Kennedy Ledges State Park. Interestingly, the Cascade Falls are on Crystal Creek, which enters the Grand River, and ultimately flows to Lake Erie and over Niagara Falls to the St. Lawrence River, While Minnehaha Falls, on Sylvan Creek, flow into the Mahoning River, on into the Ohio, and via the Mississippi River, enters into the Gulf of Mexico. It is funny how rain that falls so close can take such widely divergent paths!

Bring a picnic and take advantage of the grassy picnic area on the other side of State Route 282, near the parking lot. These trails are worth spending an entire day with the family.