This trail circles the Ritchie Ledges, which were formed during the Pennsylvanian Period, about 300 million years ago. The Sharon conglomerate which makes up the ledges contains mostly quartz, as well as numerous small pebbles. 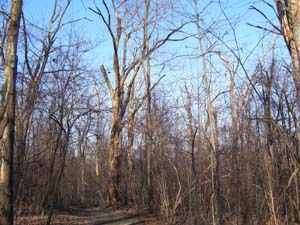 To access the trail, park at the Ledges or Octagon Shelter. From the Ledges Shetlter, you can access the trail from just about any direction. Today, We'll walk north, past the shelter from the parking lot. Built of American Chestnut harvested on site, the Ledges shelter is a Civilian Conservation Corps structure dating to the 1930's. Past the shelter, a sign marks the spot where you can head off in any of the four cardinal directions and connect to the ledges Trail. Turn left and head into the Eastern Hemlock stand that marks the area around the ledges themselves.

Soon the trail will take you past the top of the ledges and wind around and down a slope to the bottom of the ledges. Be careful to stay on the trail. This area is dotted with rare and sensitive plants that could suffer from your heelprints.

About a third of a mile down the trail, assuming you follow the Ledges Trail counter-clockwise, you will find a small cave. This wet, cool box in the side of the cliff is known as Icebox Cave. The forests around the cave consist of a diverse mix of tree and herbaceous species that benefit from the cooling effect of the shady ledges, and the groundwater seeps that spring from the base of the ledges.

You will to see Eastern Hemlock, the peeling smooth bark of Yellow Birch, tall, straight Yellow Poplar, also called Tulip Poplar, or Tulip Tree. During the growing season, you should see skunk cabbage covering the wet areas below the trail, where groundwater comes to the surface creating the right conditions for this wetland plant. Other plants of interest you may see are Rock-Harlequin and the Round-leaved Orchid.

You may be lucky to hear one of the numerous bird species that frequent the ledges area, including the Acadian Flycatcher, Wood Thrush, Tufted Titmouse, Hooded Warbler, Ovenbird, Louisiana Waterthrush, or the Blue-headed Vireo. If you visit around dusk, you may also be lucky enough to hear the "who cooks, who cooks, who cooks for you all" of the Barred Owl. 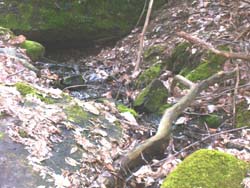 Small seeps like this one at the base of the Ritchie Ledges form the primary headwater streams that feed Haskell Run. These streams ultimately find their way to the Cuyahoga River, and then Lake Erie.

As you continue along the trail, you will walk next to tall ledges, 30 to 60 feet in height. Near the northernmost leg of the trail, a short connector trail connects to the Haskell Run Trail which would take you on to Cuyahoga Valley National Park's Happy Days Visitor Center.

If you contuinue around the ledges, you will shortly pass the Octagon Parking Lot, another access point for this trail. Soon, the trail will take you up a slope and will curve left. As you reach the top, you will be at the overlook. Be sure to stop here and take a gander at the miles and miles of rolling treetops nestled in the valley. From the overlook, it is just a short walk back to the Ledges Parking Lot, across a large grassy field.

Keep dogs on leash at all times. Please stay on the trail in the ledges area because sensitive plant species abound here, and even minimal trampling can kill sensitive plants.